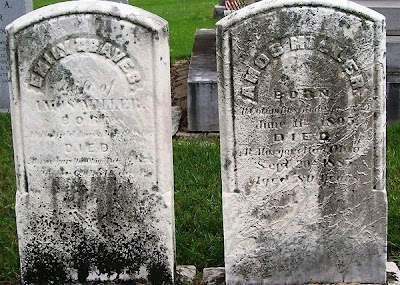 Articles about Mr. and Mrs. Amos Miller appeared in the Sandusky Register on December 23, 1870 and September 21, 1885. Amos and Emily Graves Miller were residents of Margaretta Township in Erie County, Ohio from 1852 to 1866. In 1866, the couple moved back to the state of New York. They returned to Margaretta in April of 1870, to live near their only son Capt. Wells W. Miller. Mrs. Miller was ill at the time of her move back to Ohio, and she was an invalid the last several months of her life. She suffered from rheumatism.

According to the Sandusky Register, Mrs. Miller was "a woman of extraordinary force of character and enterprise. Few persons are better read in the political history of the day than was Mrs. Miller. Amiability and mental force were peculiarly blended in her character. She bore her long and most painful illness with great fortitude." The article continued, "Mr. and Mrs. Miller had returned to this county at the solicitation of their son, Capt. Miller, and her death so soon after settlement here destroyed the promise of a long anticipated permanent reunion of the family."

Emily Graves Miller died on December 19, 1870, and Amos Miller died on September 20, 1885. They are buried in the Castalia Cemetery in Margaretta Township of Erie County, Ohio.
Posted by Dorene from Ohio at 4:09 AM