Joseph Orshoski was first married to Julia Herzog. Together they had six sons. Julia died in 1919. As was told in an earlier blog entry, the family legend was that after his first wife died, Joseph said to his family back in Hungary, "Send me a new wife, one named Julia." And, in keeping with his wishes, a new wife was found. Julianna Szomolya came to the United States on September 30, 1921. She and Joseph were married, and had two daughters. Joseph and Julianna were married for over fifty years, and left a host of children, grandchildren, and great grandchildren. 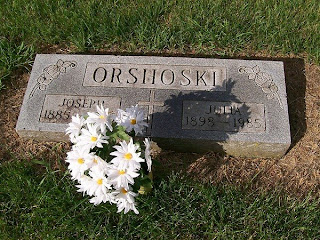 Joseph Orshoski and his second wife Julianna Szomolya are buried in the Castalia Cemetery in Erie County, Ohio. They raised their family in the small unincorporated village of Bay Bridge, Ohio, situated on the northern coast of the Sandusky Bay, which leads into Lake Erie. Julianna, known as Grandma Orshoski, was known for her wonderful cooking. Some of her favorite dishes were chicken paprikash and Hungarian nut rolls.

The Medusa Portland Cement Company provided many jobs for men in Bay Bridge and the surrounding area from the late 1890’s until about 1960. 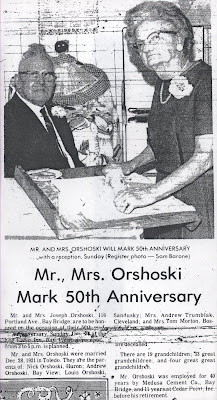 The article above was in the Sandusky Register in December 1971 when Joseph and Julia Orshoski celebrated their fiftieth wedding anniversay with a family party at the Log Cabin Inn, in Bay View, Ohio.
Posted by Dorene from Ohio at 3:49 AM