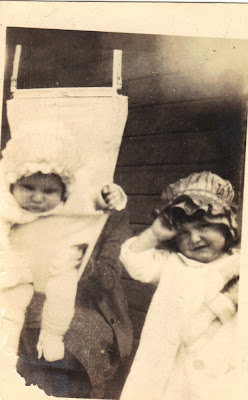 Thanks to my dear cousin in Florida, I now have an image of my Aunt Bertie, my father's older sister, who is the younger child (on the left) in the picture above, about 1926. Hilda was an aunt to Bertie, though Hilda was only one when her niece was born! The older toddler (child on the right) is my Great Aunt Hilda Yeager. Aunt Bertie lived a full, rich life, which included serving as a police woman and co-owning a family restaurant for many years.

Great Aunt Hilda Yeager died when she was only four years of age. She was the daughter of my great grandparents, Andrew and Lena Yeager. Hilda died as a result of influenza. She was buried at St. John's Cemetery, near her parents' final resting place. 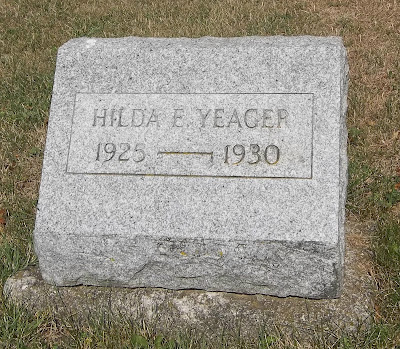 Below is a transcription of the obituary for Hilda Yeager, which appeared in the April 7, 1930 issue of the Sandusky Star Journal:

The funeral of Hilda Elizabeth Yeager, 4, daughter of Mr. and Mrs. Andrew Yeager, who died of "flu" Saturday, will be held from the family residence on River Rd., about a mile south of Huron, Tuesday afternoon at 1:30 and 2:00 from Zion Lutheran Church, the Rev. W. R. Lucht, pastor, officiating. Besides her parents the child leaves two brothers, Fred and Andrew, and three sisters, Mrs. Emma Orshoski, Mrs. Norma Ernst, and Miss Dorothy Yeager, all of Huron.

Posted by Dorene from Ohio at 6:27 PM

What a wonderful photo!

Thanks so much for stopping by Amy!

Until today, I never knew there was a photo of little Hilda, who died so young in 1930!

Such a precious photo! You are indeed lucky to have such a gem. :-) Thank you for sharing it in the COG, Doreen!

What a wonderful treasure. Nothing makes me happier than finding a photo of an ancestor.

Dorene, Always love the interesting things that show up on your blog. This photo is a gem-- so nice to have pictures of our parents siblings -- makes the families so much more real and familiar. Thanks

Thanks so much for all your kind words!

I love "Happy Dance" moments. They make me laugh and cry for joy! So glad you shared with us.