Carnival of Genealogy: What tree best represents your family’s history?

The topic for the 110th Carnival of Genealogy asks the question: 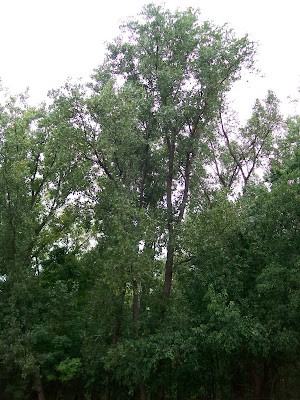 For most of my life, I have been surrounded by Cottonwood trees that are so numerous in northern Ohio. The Ohio Department of Natural Resources states that the Eastern Cottonwood prefers moist soils, but, it adapts surprisingly well to harsh conditions, especially poor, dry soils. Cottonwood trees often grow to a height of 80 feet. In so many branches of my own family tree, my ancestors often faced harsh conditions. Julius House and his family traveled from Connecticut to Ohio in a covered wagon in 1815, and when they arrived in Ohio, they had to build their own home, and grow their own food! I feel strongly that Daniel and his young son Patrick Larkins dealt with poverty in their native land of Ireland. Great Grandma and Grandpa Parker lost their beloved family farm when the government took their land by eminent domain for the war effort during World War Two. My mom lost both her parents before she was 18 years old, but she taught us how to love and live, and be thankful for the small things. My dad had only a 10th grade education, but he was the best plumber I ever knew, and he truly lived the Golden Rule, making friends with most everyone he ever met.

Hardship builds character, and many of my German and Hungarian great grandparents dealt with discrimination, because they spoke with an accent, and they were not accustomed to the ways of America when they first arrived here. I am thankful for my hearty ancestors, who were brave, and knew how to face trials. As the cottonwood tree grows tall, so did many branches of my family tree grow to be quite large. It is a joy to learn about them, and also to hear about so many other Geneabloggers' and Graveyard Rabbits' families as well!

Posted by Dorene from Ohio at 1:29 AM

I'm a fan of the cottonwood tree. We have one in our back yard and there are several in our neighborhood too. I'll think of your family's hardships whenever I look at the trees. Nice article!

Thanks so much Jasia! We have SO many cottonwoods in our neighborhood!

Lovely post Dorene. I too have a few cottonwoods in my yard, but, mine are growing down by the pond, sucking the water out of it every summer with the assistance of a few willow! LOL

Dorene, I really liked your post and quick but meaningful recap of the hardships your family face. BTW, the cottonwood was my favorite tree on the farm where I grew up ---- and I had my own special tree where a young girl and her musings were cradled far above ground. Loved it.

Dorene - great post, but I have to admit I hate cottonwoods because of allergies.

Keep up the good writing

Thanks for so many kind words! It was a great carnival of genealogy!