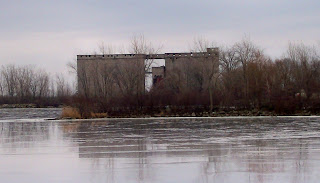 The historical marker pictured below was placed near the site of the former Medusa Cement Company in 2005 by the Erie County Historical Society. The Bay Bridge plant closed about 1960. 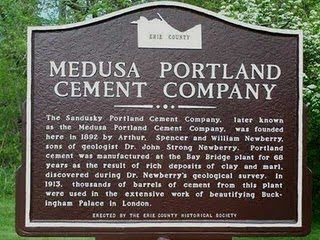 In a 1912 issue of Water and Sewer Works, available at Google Books, the Sandusky Portland Cement Company advertised that Medusa cement was used in the construction of a mausoleum in Tiffin. Librarians from the Tiffin Seneca Public Library helped me find the location of this mausoleum, which is found at the Greenlawn Cemetery in Tiffin, Ohio, on Coe Road. 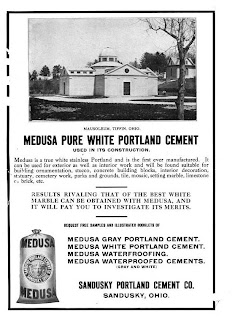 An advertisement in volume 52 of Architectural Record, also available at Google Books, tells us that the Arlington Memorial Amphitheater at Arlington Cemetery was executed in marble that was set in mortar made from Medusa stainless white cement. 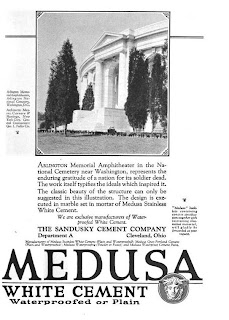 The former Medusa Cement Company in Bay Bridge provided jobs for hundreds of residents of Erie County, and was used in many the construction of many area roads, including the Ohio Turnpike. A brief entry from volume 6 of Concrete-Cement Age, edited by Allen Brett and Harvey Whipple, describes some of the uses for Medusa Cement in this description of an informational booklet available from the Sandusky Portland Cement Company in 1915.

Medusa White Portland Cement—Sandusky Portland Cement Co., Sandusky, Ohio, paper, 9" x 7", 32 pp., illust. This booklet describes in minute detail the use of Medusa White Portland cement for building ornamentation, concrete building block, interior decoration, cemetery work, parks and grounds, tile, mosaic, statuary, etc. The method of using this cement for stucco work is also thoroughly described, and illustrations given of typical buildings wherein this cement has been used. Testimonial letters are also given from many users of Medusa cement.
Posted by Dorene from Ohio at 4:04 AM

Very interesting! I've seen those silos for years when we go for a Sunday drive out your way and I always thought they were for grain!

They actually were used for storing grain one year, but long after Medusa had closed up operations here.