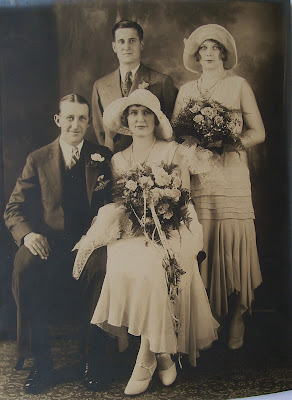 In going through some of my mother's scrapbooks, I ran across this picture of my maternal grandparents, who were the attendants for a couple who got married on August 30, 1930. The bridal couple, in front, are Louis Moosbrugger, son of Mr. and Mrs. Robert Moosbrugger, and Adeline Gast, the daughter of Mrs. Hermine Gast. The wedding took place at Emmanuel Evangelical Church, now known as the Emmanuel United Church of Christ, at the northeast corner of Columbus Avenue and East Adams Street in Sandusky, Ohio. Rev. C. J. Scherger officiated at the wedding. Attendants for Louis and Adeline were my grandparents, Steen and Doris (Wheeler) Parker. The ladies' hats and dresses were so beautiful!

All the persons in the photo were buried in Sandusky's Oakland Cemetery. Doris Wheeler Parker died at age 32, on May 6, 1943. Steen Parker died on May 10, 1949. Adeline Gast Moosbrugger passed away on March 2, 1970, and Louis Moosbrugger lived to be age 90. Mr. Moosbrugger died in Cuyahoga County on June 1, 1988, but he was buried next to his wife in Sandusky, Ohio.
Posted by Dorene from Ohio at 4:40 AM

What an absolutely stunning photo, a real treasure!

Dorene - This is a lovely photo. I especially love the hats.

Two beautiful couples. I am taken with the clothes and the bouquets. Your grandmother died at such a young age.

What an incredibly beautiful photograph! Lucky you!

Thank you all for your kind words! I so wish that I could have met my grandparents!

Thank you for posting. Adeline was the sister of my husband's father's father.