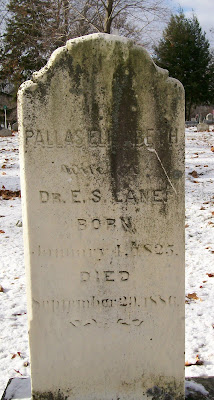 Pallas Anderson was the only daughter of Dr. George Anderson, Sandusky's first doctor. She was born in Sandusky in 1825, which was located in Huron County at that time. (Erie County was founded in 1838.) According to records found at www.familysearch.org, Pallas Anderson married Dr. Ebenezer Shaw Lane in 1845. Ebenezer Shaw Lane was the son of Judge Ebenezer Lane, a beloved early citizen of Sandusky.

Helen Hansen wrote in AT HOME IN EARLY SANDUSKY, that the Dr. Ebenezer Shaw Lane and his wife Pallas lived at 318 Huron Avenue in Sandusky. Dr. Lane worked faithfully to aid the sick during the cholera epidemic of 1849. He was the first secretary of the Erie County Medical Society, which was organized in 1850. By 1870, Dr. Lane and his wife moved to Chicago. The 1880 U.S. Census for Chicago lists the children of Dr. E. S. Lane and his wife Pallas as: Ebenezer, Mary, and Fannie. Mrs. Pallas Anderson Lane died in 1886, and is buried in Oakland Cemetery, where many other Lane family members also are buried.
Posted by Dorene from Ohio at 4:29 AM

Interesting first name....Pallas. I have never seen it before. I wonder if it is the surname of an ancestor. Great research as always.

Thanks Linda,
I will have to get digging and try to find out where the name Pallas came from!