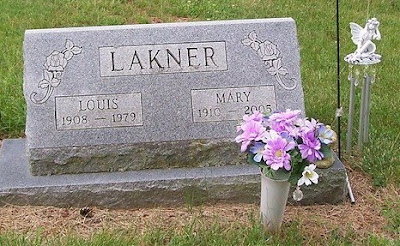 Mary Lakner, whose maiden name was Doza, was born on September 15, 1910, to Mr. and Mrs. Martin Doza, who were both natives of Hungary. As a child, Mary was a member of a Hungarian dance troupe. They performed at church and family gatherings. When Mary was a young woman, she did cooking and cleaning for residents of Cuyahoga County, Ohio. On her days off, she and friends enjoyed going to dances in Cleveland.

In 1934, Mary Doza married Louis Lakner. An announcement for their application for a marriage license appeared in the August 4, 1934 issue of the Elyria Chronicle Telegram.

Mary and Lou moved to Bay Bridge, Ohio in the mid 1930's, and they resided there throughout the rest of their lives. For many years Mary worked at the local store in Bay Bridge, which also served as a tavern,post office, and town hall. Because of her years working at the store, Mary got to know everyone who lived in the small unincorporated community of Bay Bridge. Two major employers were the Medusa Cement factory and Russell Trucking lines. A favorite pastime of Mary's was to sit on her front porch and visit with her neighbors. She talked about days gone by, when tourists enjoyed fishing off the Bay Bridge, and trucks drove in and out of Medusa and Russell Trucking all day long. Mary saw several generations of children grow up, and of course attended countless weddings, baby showers, birthday and anniversary parties. Mary was a fountain of wisdom, and she was a terrific listener. Mary Doza Lakner passed away on June 5, 2005. She and her husband Lou are buried at the Castalia Cemetery. Mary is still missed dearly by her family and friends.

Mary is pictured here with her neighbors in Bay Bridge in the fall of 2004. 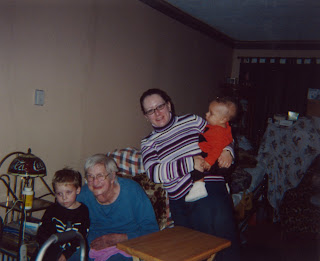 Posted by Dorene from Ohio at 4:07 AM