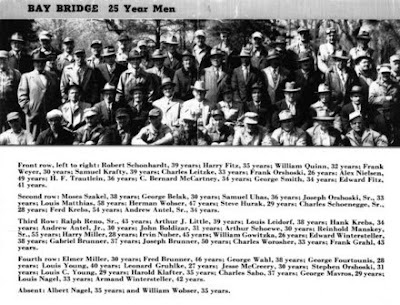 This copy of a photograph from the Medusa Cement Company honors the men who were employed at the plant for 25 years or more.(Dated from the early 1950's.) The Sandusky Portland Cement Company opened its first factory in Bay Bridge, Ohio in 1892. Soon the company's name was changed to Medusa, after the Greek goddess, who turned to stone all those who looked upon her. Click on this link for a clearer view of Medusa's 25 year men. The Bay Bridge division of the Medusa Cement Corp. closed about 1960.

Many of the employees of Medusa were Hungarian and German immigrants. Some of the surnames of the employees are: Fitz, Quinn, Krafy, Brunner, Orshoski, Weyer, Krebs, Uhas,Hurak,Nuber, Miller, and Mavros, just to name a few. In 2005, the Erie County Historical Society placed a marker honoring the former cement factory in Bay Bridge, Ohio. 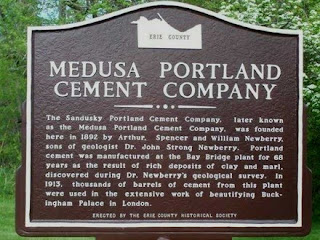 Many of the men who formerly worked at the Medusa Cement Company in Bay Bridge are buried at the Venice Cemetery and the Castalia Cemetery in Erie County.

Pictured below are Ralph Brooks, Paul Orshoski,Sr., and Louie Lakner at the cement mill in the 1950's. They had not been at Medusa as long as those men who are the in photo of the "25 Year Men." 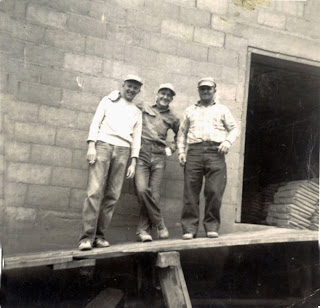 Posted by Dorene from Ohio at 4:37 AM

Doreen, What a great picture and story. My father in law and his father are both pictured. My husband remembers a lot of the men pictured and their families.
Chris Antel

Most all of the men in my dad's family worked there...and they worked so hard! My great grandma Orshoski said that at lunchtime her stepsons would come home and fall asleep on the living room floor.

She used to give the grandsons a quarter to take Grandpa's lunch over to him at "the mill."

I can remember lots of trucks loaded with cement, and Russell Trucking operated out of Bay Bridge as well. Quite different from today's quiet neighborhood in Bay Bridge.

So glad you found someone you knew in the photo!