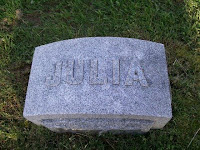 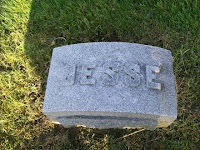 Julia House was a twin to Julius House. Julia House married Jesse Taylor on February 21, 1807. Their tombstones are located at Perkins Cemetery in Erie County. Julia died on October 28, 1867, and Jesse died in 1852.

In the June 1865 "Firelands Pioneer," Truman B. Taylor retells his grandmother Julia's account of her trip from Glastonbury, Connecticut to Perkins Township in the fall of 1815. Fourteen families packed up their belongings into wagons which were pulled by oxen and horses. They had to wash their clothes in water pails, and hang them up to dry on a fence or a pile of brush. Julia's brother Julius got sick during the trip and we left behind with relatives in Erie, Pennsylvania until he could recover.

Provisions the settlers took included bread, bacon, butter, and cheese. The roads were poor, often with deep ruts which were filled with mud or water. Nights were spent stopping where the travelers could find pasture for the animals. Sometimes the owners of cabins they saw along the way would let the "Connecticut Yankees" sleep on the floor of their cabin.

After reaching Ohio, the settlers had to clear the land and build cabins. The prairie grass was so high that "a man could set on a horse and tie the grass over his head.: Money was scarce, but after breaking up the sod, the farmers produced successful crops.

In speaking of those who had died before her, Julia wrote "Their memory will ever live fresh in the hearts of grateful descendants, and when the weight of years is upon us, coming generations will be taught to do them reverence." Indeed we do give reverence to those pioneers who had such determination and bravery.
Posted by Dorene from Ohio at 4:20 AM

Great article, Dorene! It sure makes you grateful for the comforts of life!