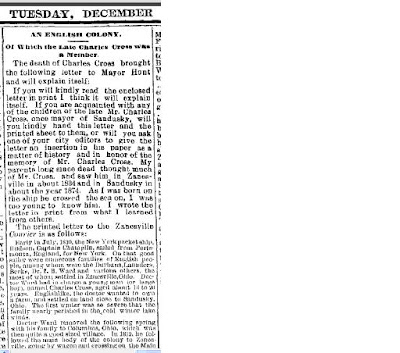 Charles Cross was born in London about 1812 and came to the United States as a young man. The Sandusky Daily Register of December 3, 1889 carried an article entitled “An English Colony” in which the writer, Hudson C. Ward, describes the trip. In June 1830 the New York packet ship the Hudson sailed from Portsmouth, England to New York. Many other families from England were on the ship, including Dr. I. B. Ward, who settled in Zanesville, Ohio.
(Hudson C. Ward was actually born aboard ship during the ocean passage to America. He was too young to recall the trip, but his parents told him the story of their journey to America.)

Charles Cross, Mr. Ward wrote, “was very devoted member of the Roman Catholic religion all his long life.” Mr. Cross was the Mayor of Sandusky from 1853 through 1856. He also held other positions in the community, including Justice of the Peace and secretary of the board of trustees of the Water Works.

On November 18, 1889, Charles Cross passed away. (His wife Patience Matilda Manning Cross had died many years before her husband.) Charles Cross is buried in St. Joseph’s Catholic Cemetery in Sandusky, Ohio. 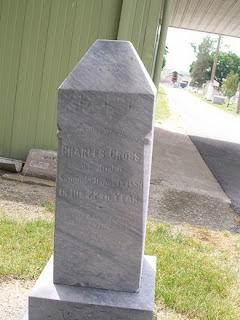 Posted by Dorene from Ohio at 6:00 AM