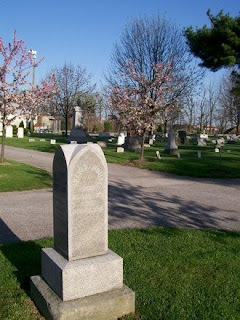 His home was known as a place for the Methodist Circuit Riding preachers to stay. Not surprisingly, two of his daughters married Methodist ministers.

Julius House married Percy Taylor. After she died, he married Mehitable Hollister. Julius and both his wives are honored with a monument at Perkins Cemetery in Erie County, Ohio.

See the June 1865 of the "Firelands Pioneer," to read more about the trip by oxen train from Connecticut to Perkins Township in 1815.
Posted by Dorene from Ohio at 7:25 PM

Julius House is my 1st cousin 5 times removed! Thanks for posting this!