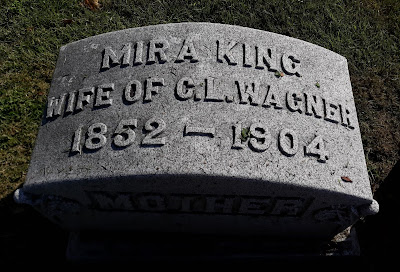 Mira King was born in 1852 in Kentucky to David A. and Martha (Vallandingham) King. In 1873 she married Sandusky businessman Charles L. Wagner, who worked in the natural ice industry. Mrs. King was known for her love of cats. 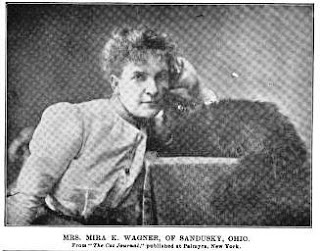 She operated Wagner Kennels at her home on Columbus Avenue. An article that appeared in the December 18, 1947 issue of the Sandusky Register Star News stated that Mrs. Wagner owned many pedigreed cats. Her kennel resembled a Veterinarian's housing unit, with many windows, porches, and rockers for the cats. The cats of Mira King Wagner, as well as her mother, Mrs. D.A. King, were often featured in the "Cat Journal." Mrs. Wagner cared deeply about the welfare of cats, and she raised funds for the Chicago Cat Refuge in the early 1900s. When someone would say to her, "Cats and women...they're all alike," Mrs. Wagner would respond, "Oh no they're not. A woman can't run up a telegraph pole, and a cat can't run up a millinery bill."

Mrs. Mira King Wagner died on July 30, 1904, after a lengthy illness. After a private funeral, she was buried at Oakland Cemetery in Sandusky, Ohio.
Posted by Dorene from Ohio at 7:27 AM

She sounds like a very fun and sweet lady!