Jacob Schmid was a German immigrant who worked as a stationery engineer in Sandusky for many years. The 1876 Hellrigle's Sandusky City Directory stated that he was employed by Jacob Kuebeler, a prominent business man who co owned a  brewery with his brother. (The Kuebeler brewery merged with the Stang brewery in 1895. In 1897, Kuebeler and Stang merged with other breweries to become the Cleveland and Sandusky Brewing Corp. ) At the time of his fall, Jacob Schmid was emplyed at the Crystal Rock Products Co., which was making soft drinks at the time, in the former Stang brewery on King Street.

Mr. Schmid died following his fall, due to internal bleeding. He left behind a son Oscar, and daughters, Mrs. Fred Lessenthien, Mrs. Ed Casper, and Mrs. Charles Klepper, and several grandchildren and great grandchildren. His wife, the former Elizabeth Tiedke, had died in 1923. Rev. H.E. Pheiffer officiated at the funeral of Jacob Schmid, whose final resting place is Oakland Cemetery.

Below is a picture of Lot 51, in Block F of Oakland Cemetery. Mrs. Elizabeth Schmid and Adelaide Lessenthien are buried in this lot, but at this time, no stone remains for Jacob Schmid. 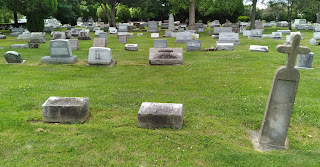 Posted by Dorene from Ohio at 2:20 PM