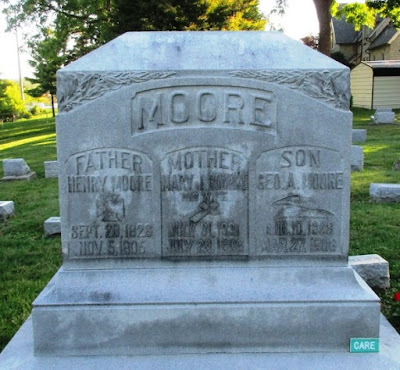 Henry Moore was born in Germany in 1826. He came to the U.S. in 1846. In 1849 he settled in Venice, Ohio, and that same year, he married Mary J. Bourke. He ran a general store in Venice with James McGookey. Mr. Moore also served as the Postmaster in Venice, Ohio for several years. During the Civil War, Henry Moore was in the 145th Ohio Volunteer Infantry. After being ill for some time, Henry Moore died on November 5, 1905. Funeral services were held at the Masonic Temple, and he was buried at Oakland Cemetery.

George A. Moore, son of Henry and Mary J. Moore died from typhoid on on March 27, 1906. Sadly, Mrs. Mary J. Moore died on July 29, 1906. Within nine months, three members of the Moore family all passed away. The Moore monument at Oakland Cemetery honors the memory of father, mother, and son. May they rest in peace.
Posted by Dorene from Ohio at 5:37 AM

I find your posts so interesting. I used to love the Cemetery Walks in Sandusky. They usually featured men, but I always hung to the back to count the wives and lost children.

Miss Merry, I am not so active on Graveyard Rabbit these days, but I have never lost my love for learning the stories behind all those stones in the cemetery!