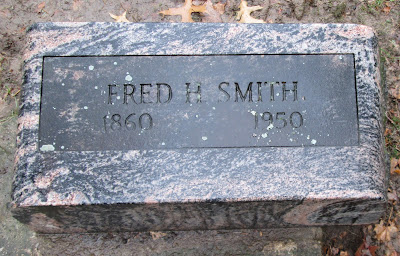 According to the book History of Huron County, Ohio,  (S. J. Clarke Pub. Co., 1909), Fred H. Smith was born in Sandusky, Ohio on February 27, 1860. When Fred was only fifteen years old, he began learning the marble cutter's trade. As a young man, Fred H. Smith worked for A.T. Davis, R.R. King, the Lake Shore Railroad, and the Flint and Pere Marquette Railroad Company. In 1883 Mr. Smith formed a partnership with W.V. McKnight. Mr. McKnight and Mr. Smith operated a successful marble business for several years. After the death of W.V. McKnight, Fred H. Smith operated the business as the Smith Monumental Works. One of the most well known monuments created by the Smith Monumental Works was the Fries Mausoleum, at the Milan Cemetery. In 1895, Fred H. Smith married Katherine Burger McKnight, who was the widow of Mr. Smith's business partner. On August 9, 1950, Fred H. Smith passed away at the age of 90. He was survived by his two stepsons, and a brother, Adam J. Smith of Sandusky. Mr. Smith was buried next to his wife in the McKnight Smith family lot at Norwalk's Woodlawn Cemetery. An obituary for Fred H. Smith appeared in the August 10, 1950 issue of the Sandusky Register Star News. 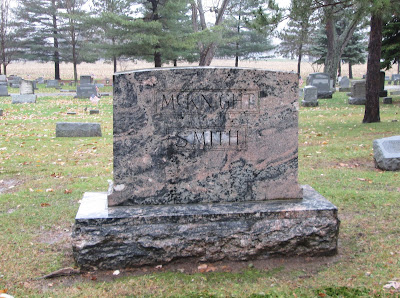 Posted by Dorene from Ohio at 5:14 AM