I Found My Parents and Grandparents in the 1940 Census! 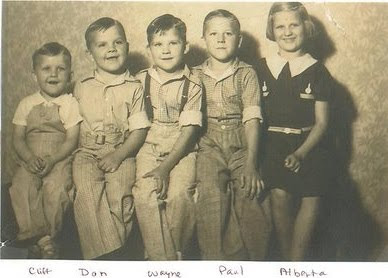 Today I finally got to view some of the 1940 Census records, at My Heritage (Thanks for the tip, Schelly Talalay Dardashti!) and I was able to locate my parents and grandparents in the 1940 Census for Erie County, Ohio! My dad, Paul Orshoski, was residing with his parents and four siblings on Newberry Avenue in Bay Bridge, just down the road from the Medusa Cement factory, where so many of my ancestors worked. Dad was 12 years old. His father was employed as a filter operator at Medusa. Grandpa Steve Orshoski was age 34, and Grandma Emma (Yeager) Orshoski was 33. Dad's siblings' ages in the census were: Alberta, 13; Wayne, 10; Donald, 8; and Clifford, age 6. The image above shows the five children of Steve and Emma Orshoski about five years prior to the enumeration of the 1940 Census. In the year 1940, none of the boys had yet thought about enlisting in the service, and none of the Orshoski children had met their future spouses yet. Several descendants of Steve and Emma Orshoski still reside on Newberry Avenue in Bay Bridge! Below is a portion of the 1940 Census page from Erie County, Ohio's Enumeration District 22-9, which contains the names of my father and my paternal grandparents, along with my aunt and three uncles. Click here to see the full census page.

My mother was only 8 years old at the time of the 1940 Census. She was living with her parents, Steen and Doris (Wheeler) Parker at 916 Polk Street in Sandusky, Ohio. My grandfather, Steen Parker, is the last name on page 20 of Enumeration District 22-29 . He was 32 years old, and worked as an enameler at Holland-Rieger, a business that made washing machines. Holland-Rieger later became Apex Manufacturing. 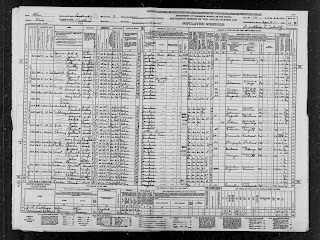 My maternal grandmother, Doris Wheeler Parker, was 29 years old. The three children of Steen and Doris were: Thomas, age 12, Joyce (my mother) age 8; and Sally, age 2. A 21 year old cousin of Doris, named James Larkins, was also residing with Steen and Doris Parker in 1940. In the image below, page 21 of ED 22-29, my grandmother Doris, her three children, and her cousin are the first five names listed on the census page. 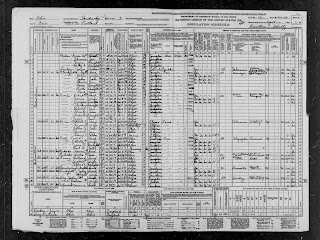 Mom and her sister and brother appear in the picture below a few years after the 1940 Census was taken. 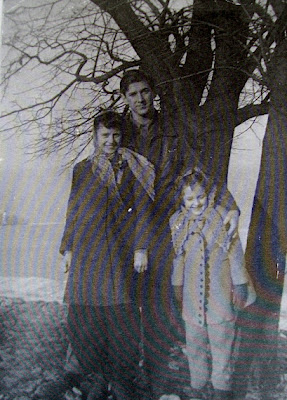 By 1943, Steen and Doris Parker had divorced, and Doris passed away from cancer on May 6, 1943. It was interesting to see the Steen Parker family listed in the Census before the onset of all these sad events. My mom, Joyce Parker Orshoski, attended school at Osborne School, just a few blocks south of her home on Polk Street. St. Paul Lutheran Church was within walking distance of her childhood home. St. Paul's was the church where Mom was confirmed and where she was married to my father. She so loved and respected Rev. J. A. Griffith. Good Samaritan Hospital (now Firelands Regional Medical Center) was just a few blocks away from Mom's home on Polk Street. Good Samaritan Hospital was the hospital where all six of Joyce and Paul's children were born, and the Firelands Regional Medical Center was my mother's final employer. She spent many happy hours at Firelands!

Email ThisBlogThis!Share to TwitterShare to FacebookShare to Pinterest
Labels: 1940 Census

Happy to hear of your success, Dorene. And I love the picture of the five siblings!

It was fun looking at the 1940 census as soon as it became online, and I did like the pictures of the five kids.

What is it that makes finding our ancestors' names in documents so exciting -- even (and maybe especially) when we knew them personally? I love the photo of the five children. Adorable.