The Wedding of Leona Schoenegge and Clifford Lindsley 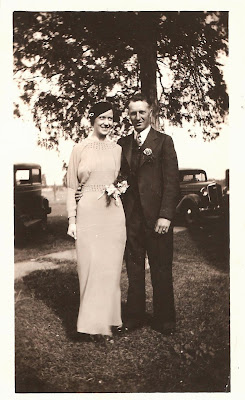 It appears that Leona and Clifford really enjoyed automobile trips, as in an article in the January 25, 1935 issue of the Sandusky Star Journal reported that Miss Janet Parker, Paul Baumeister,Miss Maribel Storrs, Paul Parker, Miss Leona Schoenegge and Clifford Lindsley had motored to Toledo Saturday to attend the automobile show.

Clifford Lindsley was the son of Frank Lindsley and the former Elizabeth Horn. Clifford was a direct descendant of W.D. Lindsley, who served two terms in the United States Congress. Leona Schoenegge was the daughter of Leopold Schoenegge, a native of Germany, and his wife, the former Eva Francis. After their marriage, Clifford and Leona lived on a farm in Perkins Township of Erie County, Ohio. During World War Two, their farm was purchased by the United States Government, to make way for a munitions factory. Clifford and Leona moved to York Township in Sandusky County, Ohio, and farmed there for many years. The Lindsley farm is still in the Lindsley family.

While Clifford and Leona Lindsley are not directly related to me, Clifford's sister Florence married my great uncle Glenn Parker. As long as I can recall, we always called the Lindsleys by "Uncle Cliff" and "Aunt Leona." They welcomed my family, my mom and dad, and all six children, to their home many times. We would bound out of the car, and head for the hay loft and spring house, and rang the dinner bell. After playing, Aunt Leona would make lunch for the whole gang, and we would fall asleep on the way home, with many happy memories. Uncle Cliff had a way of making everything seem funny, and he entertained us with stories quite often. 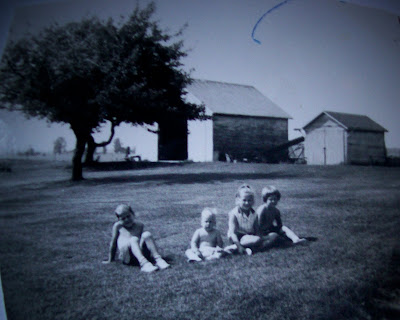 Posted by Dorene from Ohio at 1:32 AM

What a lovely article, Dorene. It's both a nice story about their wedding and their lives together. A tribute for them to be remembered by!

Thanks, Jasia! They were such dear folks!

I love the way the bride is looking sideways at the groom -- seemingly unable to take her eyes off her loved one. A wonderful remembrance of this wedding.

Could not agree with Jasia more, a lovely article and tribute. Thanks for sharing them.

They were the sweetest couple! Thanks so much for stopping by!

I love the photo, Dorene. What a sweet-looking couple. I was also interested to read the phrase "covers were laid for" in the article about their wedding. The phrase is used in a 1906 wedding announcement for one of my grandfather's brothers. Great post.

Those old fashioned phrases are great! I often run into the one about funerals that says "services were largely attended."

They are a lovely couple and the brides dress looks so comfortable!