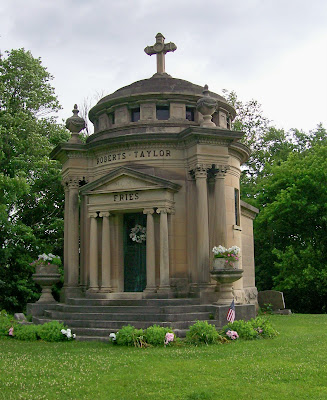 According to the book MILAN AND MILAN TOWNSHIP, OHIO, published in 1976 by the Milan and Milan Township Bicentennial Committee, Valentine Fries was a prosperous ship builder in Milan. Born in 1826 in Alsace-Lorraine, and having moved to the U.S. at a young age, Valentine Fries died on April 2, 1900. His wife Anna settled his estate, and she saw to it that a lovely family mausoleum was erected in honor of Valentine Fries and his extended family. The Fries family mausoleum, which also features the related family surnames of Roberts and Taylor, is located in St. Anthony's Catholic Cemetery in Milan, Ohio. The mausoleum contains nine catacombs, and has cathedral glass in the ceiling. The tomb was build of sandstone, and has bronze doors. The Smith Monumental Works in Norwalk, Ohio was the builder of this lovely mausoleum. 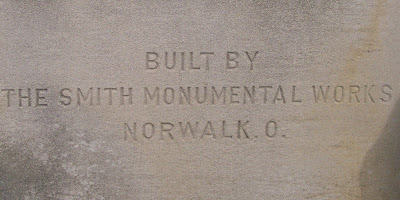 The Maritime History of the Great Lakes features a page online which contains articles about the schooner the Charles Foster, built by Valentine Fries. An article in the November 29, 1907 issue of the New York Times reported on the marriage of Valentine's widow's marriage to Harry Chapin. Burial records of persons buried at the St. Anthony's Cemetery in Milan, Ohio, are included in the database Milan Cemetery Burial Records.
Posted by Dorene from Ohio at 1:19 AM