Aunt Pat, She was Solid as a Rock! 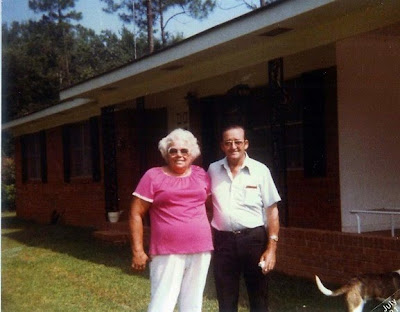 My husband's Aunt Pat is pictured above with her husband Harvey at their home in Georgia in the 1980's. Aunt Pat was born "Elece Stancil" in 1926 in South Carolina, to Huey M. and Myrtle L. (Gillstrap) Stancil, Sr. By the early 1950's, Pat had moved to Ohio and become Mrs. Harvey W. Paul. The newlyweds first lived in Margaretta Township, in Crystal Rock, a small community close to Sandusky Bay. Pat and Harvey started something, because through the years, two more Stancil siblings married two members of the Paul family!

In 1955, Pat and Harvey bought two lots on Hayes Avenue in Sandusky, Ohio. Both Pat and Harvey worked for many years at the New Departure GM plant in Sandusky. They were known as hard workers. Not able to have their own children, Pat and Harvey adopted two young boys in the 1960's. They also cared for several foster children through the years. By 1965, Pat and Harvey moved back to Margaretta Township, this time to a house that had four acres of land. Many family picnics were held at the Paul's big house on Old Railroad Street. Aunt Pat was known for her fried chicken, green beans with bacon, huge tossed salads,and of course a large pitcher of sweet iced tea. On Friday nights, when we first married, we often stopped over at Aunt Pat's and Uncle Harvey's, and had long talks, and enjoyed sodas and longhorn Colby cheese. Aunt Pat had a special way of listening, and on more than one occasion she took in a niece or nephew who was having problems getting along with their parents. She welcomed them to her home, and usually things got back to normal before long.

For a time, Pat and Harvey Paul lived in Clyde, Ohio, near several members of the extended Stancil family. In 1980, Pat and Harvey Paul moved to Georgia. Pat passed away at the age of 61, after a lengthy illness. She died on Monday, November 16, 1987, in West Green, Georgia. Funeral services for Elece "Pat" Paul were held at the Foos-Hinman Funeral Home in Clyde, Ohio, with Rev. Sam Studer officiating. Burial was at Restlawn Memorial Park in Huron, Ohio, now known as Green Meadow Memorial Park. Pat was survived by her beloved husband, two sons, two brothers, and two sisters. She is still sadly missed by her family and friends. Aunt Pat was solid as a rock. She always made me feel as though I had been born into the Paul family. I truly miss her family stories and encouraging words. 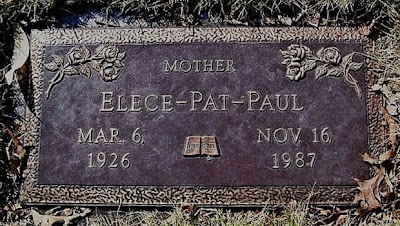 Posted by Dorene from Ohio at 6:05 PM

Aunt Pat sounds like a great lady - to adopt, then foster, and also take in the nieces and nephews during troubled times. She sounds like a comfortable person to be around. She died so young! I'm sorry for your loss. Sometimes we just keep on missing people like Aunt Pat.

Aunt Pat was just dear. Just a couple weeks after I posted the entry about her, her beloved husband H.W. Paul passed away. He was as quiet and gentle as she was strong and outgoing!
They made a great team!

What a lovely tribute, I agree with Nancy, a great lady, to adopt, foster and guide her family that way.

Sorry to hear about her husband, may they rest in peace and enjoy their reunion in the place beyond.

Thank you so much for your kind words!

Rock is such a perfect word to describe a woman who lent support to so many young people. You did a grand job describing her and reminded me of a few rocks in my family. Thanks!

Thanks so much for stopping by!
We have several female "rocks" in our family...but Aunt Pat was especially memorable!