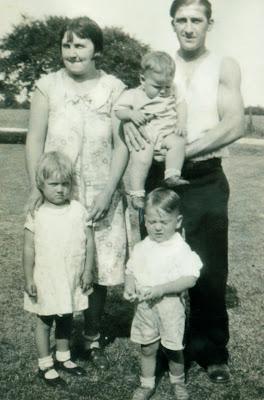 My second cousin from Nevada recently sent me several pictures that had been in a box in her mother's closet. The pictures originally belonged to her grandmother. Included in the pictures were this one of Emma (Yeager) and Steve Orshoski, and their first three children, Alberta, Paul, and baby Wayne, from about 1929.

Steve Orshoski was a longtime employee of the Medusa Cement Factory in Bay Bridge. Steve and Emma celebrated their 25th wedding anniversary in Bay Bridge in 1951. Until this lovely surprise made its way to my mailbox, I had never seen a photo of my father, Paul R. Orshoski, Sr., at such a young age. God bless Debbie and the box in her mother's closet!
Posted by Dorene from Ohio at 4:40 AM

Email ThisBlogThis!Share to TwitterShare to FacebookShare to Pinterest
Labels: Orshoski

I LOVE those old boxes in closets! :) Great picture!

I was delighted to receive it!!