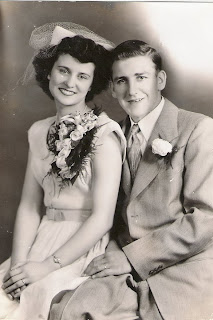 Paul R. Orshoski,Sr. married Joyce E. Parker on July 1,1950 at St. Paul English Lutheran Church in Sandusky, Ohio. But before they were married, they had a first date. I found this account of my parents' first date in the back of my baby book. 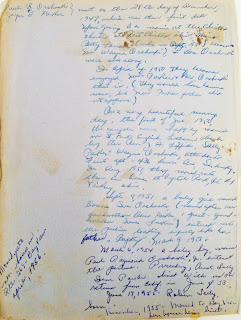 Here is a transcription of the first three paragraphs:

met on the 28th day of December, 1947, which was their first date, upon going to a movie at the Clinton Theatre at Port Clinton, Ohio. Miss Betty Ferrall (who in Sept. 1941 became Mrs. Wayne Orshoski), & Don Orshoski were also along.

In April of 1950 they became engaged. Miss Parker & Mr. Orshoski that is. (They would have been wed sooner,but Miss Parker's father did not approve.)

On a very beautiful sunny day, the first of July, 1950, the couple were happily married in St. Paul's English Lutheran Church by the Rev. J. A. Griffith, Sally Parker & Wayne Orshoski, attendants. First apt. - 436 Huron Ave., Sandusky. In Aug. 1951, the moved into their own home at Crystal Rock, Rt. #1, Vickery, Ohio.

Joyce Parker Orshoski continues her narration by telling about the birth of her first three children, and after briefly living in a rented house in Bay View, Paul and Joyce Orshoski and their three children moved into a new house on Route 269 in Bay View in April of 1956. Paul built the house himself, with a great deal of help from his extended family. For many years Paul and Joyce lived next door to Paul's brother Wayne, who incidentally married Joyce's good friend Betty Ferrall.

Joyce Orshoski lost her battle with pancreatic cancer on September 8, 2010. She was buried next to her husband Paul at the Perkins Cemetery. 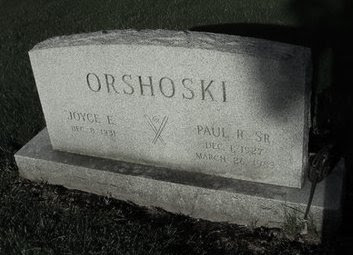 Dorene, this was such a lovely post and such a special piece of your family's history.

My baby book went missing, and I just found it today, after losing track of it for a couple years!

How wonderful that your mother recorded this information for you!

She taught me a great deal about family history!

How neat. Dad took care of all our Family heritage so now I have his records. Amazing!

Bob -
How wonderful that your dad kept up on your family history!

The photo of your parents is so lovely. Was that their wedding photo? My own parents did not have the traditional white dress wedding and I have never found any photos. I believe that my Mom wore a suit and probably had a corsage.

It is my parents' wedding photo. It looks so posed, though, so they may have gone to the photographer ahead of time....but I am not positive about that. There I so many questions that I still would love to ask my mom and dad!!