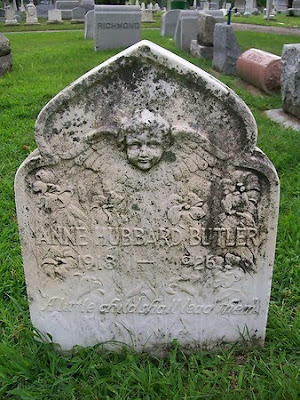 Anne Hubbard Butler was the adopted daughter of Watson Hubbard Butler and his wife, the former Susan Quay. Anne was born in 1918. Her maternal grandfather was Senator Matthew Quay of Pennsylvania. Anne's paternal grandfather was Jay Caldwell Butler, a Sandusky native who was the Captain of Company B, 101st Ohio Volunteer Infantry, during the Civil War. Anne Hubbard Butler's mother, Susan Quay Butler, died when Anne was only six years old. Sadly, Anne passed away at the age of eight, following an episode of whooping cough, on March 25, 1926. Anne's funeral was held at the home of her grandmother, Mrs. Elizabeth Hubbard Butler. The following article about the memorial for Anne Hubbard Butler appeared in the January 1, 1927 issue of the Sandusky Register.

A beautiful statuary, white Vermont marble headstone, noted for its simplicity of line and its unusual fineness of design, has recently been placed in Oakland Cemetery to mark the last resting place of Anne Hubbard Butler. The beauty of the memorial has attracted much admiring attention.

At the top of the front of the stone there is a sculptured cherub head, below which is an all-over design of delicate Easter lillies exquisitely carved in low relief, and across the center of this carving is the inscription:

which stands out in high relief, below which, at the base of the stone, is carved the text, "A little child shall lead them"

The back of the stone is without ornamental carving, deriving its beauty from the richness of the marble itself, on which appears a further inscription:

The memorial was designed, modeled, and made by the artist and sculptors of Ecclesiastical department of the Tiffany Studios of New York City, under the personal direction of its president and director, Louis C. Tiffany. 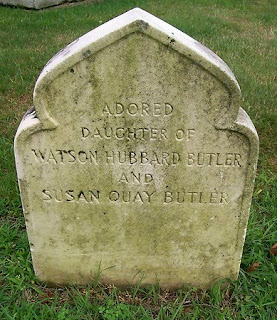 Posted by Dorene from Ohio at 4:00 AM

Wow,I have never read any ware about Tiffany having a "Ecclesiastical department".Makes one wonder what else is out there.Thanks for sharing!

I was very surprised too! The lobby of the Hotel Breakers at Cedar Point also has stained glass windows by Tiffany.