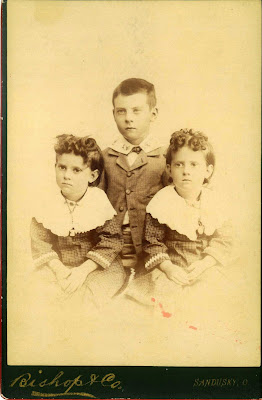 Harry Milner Steen was the oldest child of Charles F. and Sarah Steen, born on May 6, 1876.His middle name was the surname of Sarah's adoptive parents, Henry and Huldah Milner. Harry M. Steen is pictured with his identical twin sisters, Ada and Alpha Steen, about 1883. The Steen family lived on a farm in Perkins Township.


Harry died when he was only eight years old, on March 26, 1884. He is buried near his parents' graves in the North Ridge section of Oakland Cemetery. Alpha Steen Martin would later name her first son Harry, after her beloved brother who died so young. 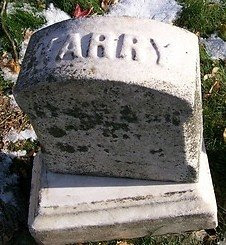 An obituary for young Harry Steen appeared in the March 30, 1885 issue of the Sandusky Register:

The death of Master Harry Steen, only son of Mr. and Mrs. Charles Steen, occured Thursday. The funeral took place at the family residence of the grandparents, Mr. and Mrs. Henry Milner, on Saturday at 2 p.m. The attendance at the services and to Oakland Cemetery was very large. The services were conducted by Rev. S. Z. Kauffman. Harry was a bright, winsome lad of nine years, and well known among those who knew him as one precocious beyond his years. The sympathy of a very large circle of relatives and friends is extended to this household in this hour of their very deep sorrow and and bereavement.


A "Card of Thanks" from the Steen and Milner families appeared in the the March 31, 1885 Sandusky Register:

Mr. and Mrs. Chas. Steen and Mr. and Mrs. Henry Milner, of Perkins, desire to express their heartfelt thanks to those friends and neighbors who extended so many acts of kindness, assistance and sympathy in the family's recent great bereavement. Toward one and all a gratitude that words fail to express is cherished and the bonds of freindship made the stronger and sweeter.
Posted by Dorene from Ohio at 4:52 AM

What beautiful children! The thank you card was so thoughtfully worded. We don't see many like that now, do we? I loved the twins' necklaces. One pendant is round and the other rectangular ~ do you think their mother needed some way to tell them apart?

Harry looks nearly like he could be their triplet! Their mouths look so much alike. Wonder what happened to him?

I am pretty sure that Harry died of pneumonia. "Reading between the lines," in old family papers, I think those children were very much loved! Thanks for your kind words!

P.S. Later on, the twins had a baby brother, who I am sure was also very much doted on. Rollin became a teacher.

Harry looks very wise for his age. He may not have lived long, but I think that his eyes reveal an old soul. Thank you for sharing his story!