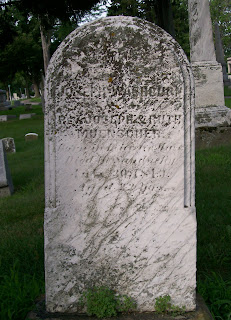 Joseph Washburn Muenscher was born in South Leicester, Massachusetts on September 21, 1826, to Rev. Joseph Muenscher and his wife, the former Ruth Washburn. A brief biographical of sketch of Joseph W. Muenscher is found on page 190 of the book entitled Samuel Davis, of Oxford, Mass., and Joseph Davis, of Dudley, Mass., and Their Descendants, written by George L. Davis George F. Daniels in North Andover, Massachusetts in 1884.

The promising young lawyer died at age 22 during Sandusky's cholera epidemic in 1849. He was buried in Sandusky, Ohio. Oakland Cemetery did not begin accepting burials until 1850, so it is likely that Joseph W. Muenscher may have first been interred at the Cholera Cemetery in Sandusky, and his remains moved to Oakland Cemetery after it opened. Joseph W. Muenscher's sister, Eliza C. Muenscher, was the first wife of pioneer Sandusky merchant Austin Ferry.
Posted by Dorene from Ohio at 1:25 AM

Dorene, you always bring a sense of life to the those stones you so lovingly photograph and memorialize. This one struck me as very poignant.

Thanks so much Joan! This young man's life was so promising, but his life was cut short...