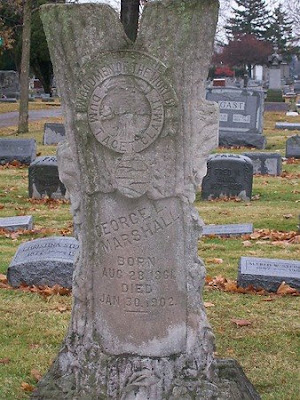 While only in his early forties, George L. Marshall died suddenly at his home on McDonough Street in Sandusky, on January 30, 1902. The article in the Sandusky Register the day after Mr. Marshall's death reported that George was sweeping the snow from his sidewalk when he felt faint, and went into his house. "Inside of a a few minutes he was no more, his life departing quietly and unostentiously before medical aid was available." The article continued to say that George L. Marshall was "well and favorably known not only among the railroad men but generally." Mr. Marshall had been a brakeman on the Lake Shore Railroad. He was survived by his widow and three young children. His brother, John Marshall, had died only the week before.

In August of 1902, the members of Sandusky Camp No. 54 of the "Woodmen of the World," of which George had been a member, erected a monument in Oakland Cemetery in memory of George L. Marshall.
Posted by Dorene from Ohio at 4:21 AM

Email ThisBlogThis!Share to TwitterShare to FacebookShare to Pinterest
Labels: Marshall, Railroad, Woodmen of the World

Well I am starting to come out of my writer's block. See - I'm writing to you right now.! Thank you for thinking of me. It's people just like you that make the world a better place to live in.