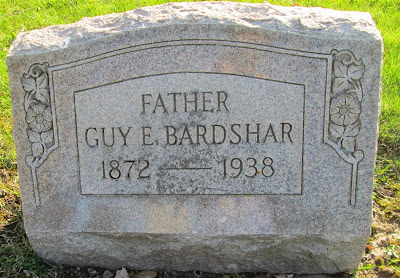 According to his death certificate, Guy Edward Bardshar was born on July 19, 1872 to Solomon and Amelia Bardshar, in Castalia, Ohio. On August 1, 1901, Guy Bardshar married Hedwig Wiedel in Erie County, Ohio. Guy listed his occupation as machinist. Before Guy got married, he was issued this patent for a churn cover. 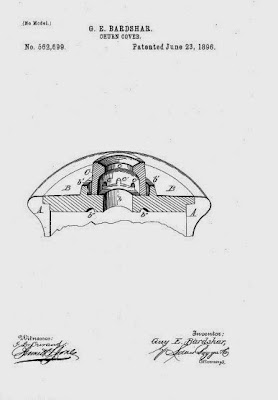 Eventually Guy and Hedwig Bardshar moved to Cuyahoga County, Ohio. Guy E. Bardshar passed away on November 30, 1938. This brief obituary for Guy Bardshar was listed in the Cleveland Necrology file: 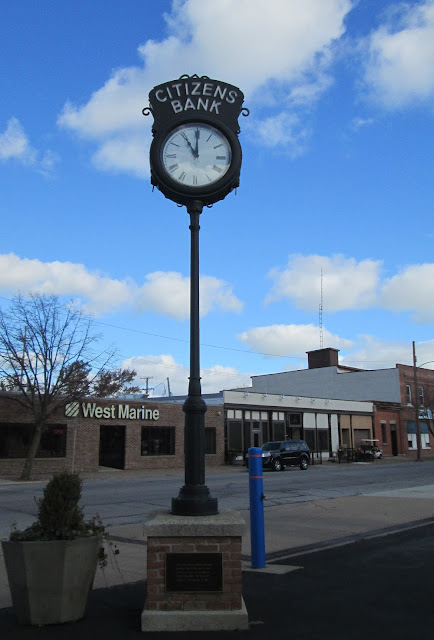 This clock from the old Citizen's Bank in Sandusky, Ohio is now located directly across the street from the Civista Bank at Wayne and Water Streets in downtown Sandusky. The clock was originally located at the old Citizens Bank in the Feick Building on Market Street. Since the mid 1980s, the downtown Sandusky office of the Citizens Bank (now Civista Bank)  has been at 100 East Water Street. The clock was moved to its current location in 1992. In 2015, the bank formerly known as the Citizens Banking Company became known as Civista Bank. 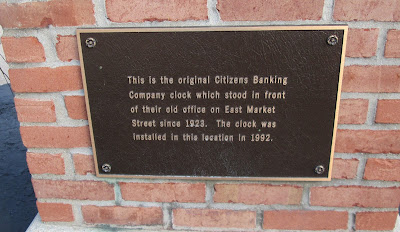 Henry J. Booth, One of the Founders of the Union Iron Works 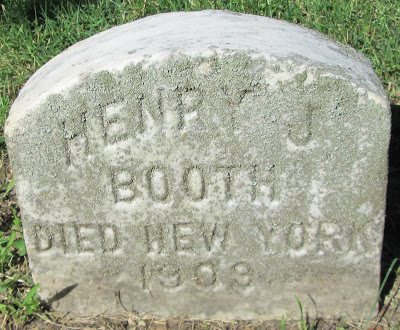 According to the 1880 U.S. Census, Henry J. Booth was born in England in 1830. In 1880 he was residing in San Francisco, California, with his wife Elizabeth, and their children, Edgar, Jessie, Lizzie and Genevieve, ranging in ages from 8 to 18. Three other adults were also residing in the Booth household in 1880. Henry listed his occupation as proprietor of a foundry. A listing from the 1865 San Francisco Directory, available at the Internet Archive, features an advertisement from the Union Iron Works, of which H.J. Booth was one of the partners, along with George W. Prescott and Irving M. Scott. 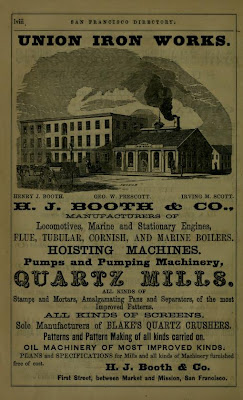 The company manufactured locomotives, marine and stationary engines, and a variety of pumps and pumping machines. By 1909, Henry J. Booth had moved to New York City, where he resided with his youngest daughter Genevieve. A brief obituary which appeared in the November 27, 1909 issue of the New York Times reported that Henry J. Booth had died on November 26, 1909. The article stated that Henry J. Booth moved from Ohio to San Francisco in 1851, where he was one of the founders of the Union Iron Works. Mr. Booth was survived by his widow, and three daughters. His remains were brought to Sandusky, Ohio, where he was buried at Oakland Cemetery.  Henry J. Booth was buried in Block 21, where several other Booth family members were also laid to rest.
Posted by Dorene from Ohio at 1:30 AM 0 comments 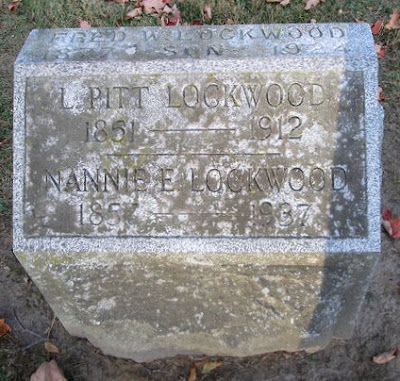 Mrs. Nannie Lockwood died in Cincinnati on July 2, 1937. Her death record indicates that her parents' names were Warren Smith and Marie Townsend Smith. Mrs. Lockwood was buried next to her husband at Oakland Cemetery. Sadly, the son of L. Pitt and Nannie Lockwood, Fred, had died in 1924.Fred's name is located at the very top of the Lockwood monument.


Though I do not have an official vital record that provides that L. Pitt Lockwood's parents' names, I did some sleuthing to find out who his parents were. Since S.M. Lockwood and H.H. Lockwood, both brothers of L. Pitt Lockwood, both have these two names listed as their parents: father, Horace Allen Lockwood and mother, Sarah Ramsdell, It makes logical sense that the parents of L. Pitt Lockwood were also Horace Allen Lockwood and Sarah Ramsdell. Horace Allen Ramsdell died in 1857 when his children were very young. Both the Ramsdell and Lockwood families were pioneer residents of the Firelands. Hewson Peeke wrote in his book A STANDARD HISTORY OF ERIE COUNTY, OHIO, that Horace's father, Samuel Mills Lockwood, traveled to the Firelands in the early 1800's, and he was in charge of surveying and selling much of the land in Danbury and Portage Townships of Ottawa County, Ohio.
Posted by Dorene from Ohio at 1:30 AM 0 comments 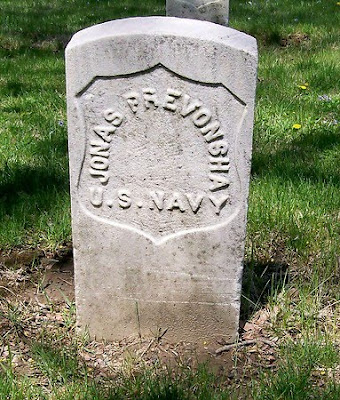 Jonas Prevoncha was listed as a sailor in the 1890 Sandusky City Directory. He resided at the northwest corner of Hancock and Monroe Streets. During the Civil War, Jonas Prevonsha served in the United States Navy on the U.S.S. Carondelet, a Union ironclad gunboat.

According to the obituary of Jonas Prevonsha (sometimes spelled Provonsha), Jonas died in Ward D at the hospital of Ohio Soldiers' and Sailors' Home on March 18, 1918. Obituaries for persons who died in the Sandusky area in 1918 have been compiled in a notebook on file at the Sandusky Library. Jonas Prevonsha was 90 years old at the time of his death.He had been admitted to the Ohio Soldiers' and Sailors' Home on June 22, 1892. His nearest of kin was Alonzo Prevonsha, of Sandusky. Funeral services for Jonas Prevonsha were held at the home of Mr. and Mrs. J. Hornig. Burial was in the cemetery of what is now known as the Ohio Veterans Home.
Posted by Dorene from Ohio at 3:07 AM 0 comments 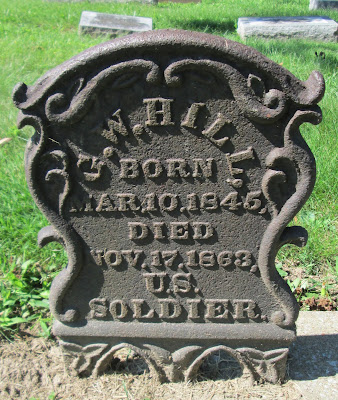 According to the Roster of Ohio Soldiers in the War of the Rebellion, George W. Hill enlisted as a musician in Company B of the 101st Regiment, Ohio Volunteer Infantry on August 5, 1862. He was 18 years old when he enlisted. Though his grave marker states that he died on November 17, 1863, the Ohio Roster lists the date of death of George W. Hill as November 12, 1862. G.W. Hill died at Perryville, Kentucky, from disease. He was buried at Sandusky's Oakland Cemetery. You can learn more about the 101st O.V.I. in the book Story of the One Hundred and First Ohio Infantry: A Memorial Volume, by Lewis W. Day, available full text at Google Books. Other men from Sandusky who served in this unit were: Jay Caldwell Butler, John M. Butler, and Josh B. Davis. 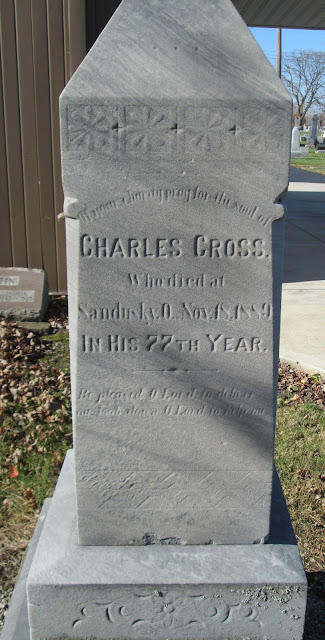 Today as I was visiting the St. Joseph Cemetery in Sandusky, Ohio, I stopped to look at the tombstone of my 4th great grandfather, Charles Cross.  Underneath the phrase "In His 77th Year" is an inscription. 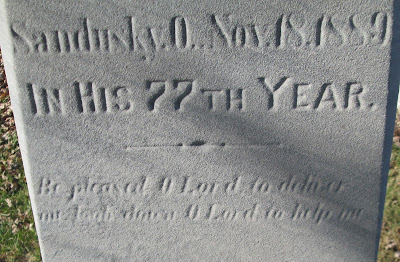 It a passage from the Douay-Rheims Bible, Psalm 40:13, which reads:

I think that the survivors of  Charles Cross wanted those in the generations who came after him to see this inscription from 1889! Several other versions of this verse can be viewed at the BibleHub online. 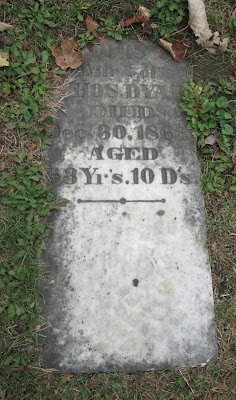 This flat stone is found in Block 59 of Sandusky's Oakland Cemetery. Mrs. Louisa Dyar (sometimes spelled Dyer) died on December 30, 1863, at the age of 63 years and 10 days.  She was the wife of Thomas Dyar/Dyer, who was the keeper of the Marblehead Lighthouse from 1861-1865. I am sure the Marblehead Lighthouse, which is the key feature at an Ohio State Park visited by thousands of tourists every year, was a very familiar sight to Louisa! 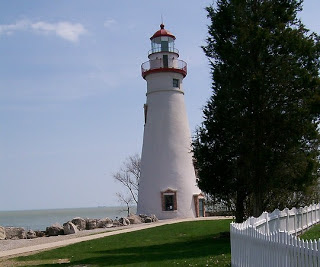 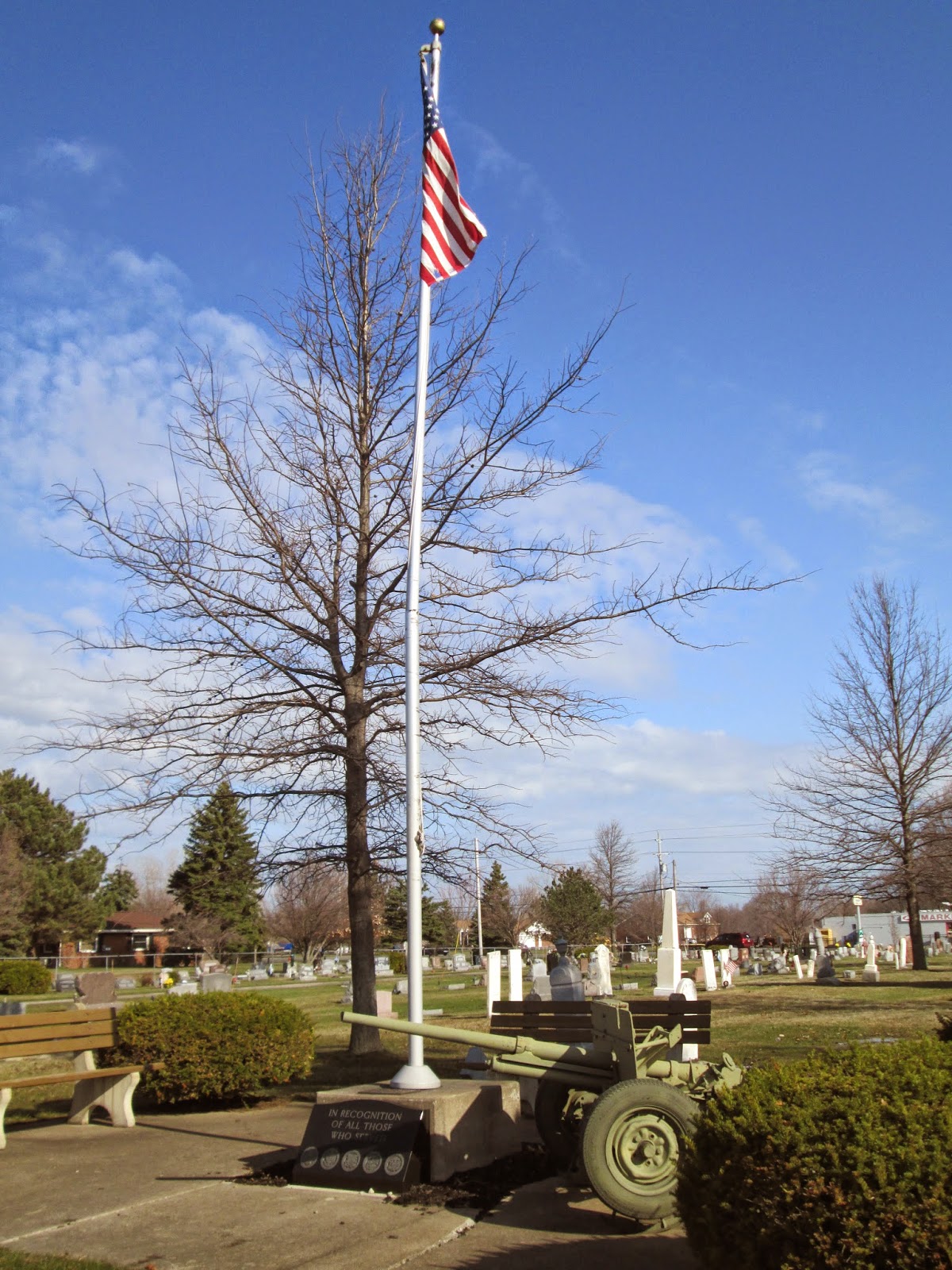 This monument is provided by the generosity of the Marblehead Veterans of Foreign Wars, Post 7572, and the American Legion, Post 555. November 11, 2007. 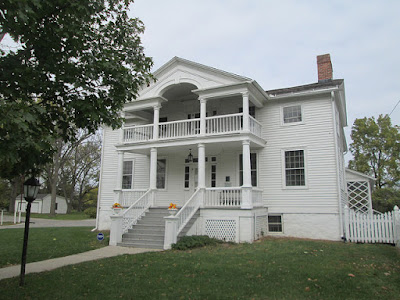 Recently, my friend and I got to visit the Wolcott House, on River Road in Maumee, Ohio. It was the former home of James Wolcott and his wife, the former Mary Wells. The Wolcott House built by James Wolcott, who was an entrepreneur who moved to Ohio from Connecticut. His wife, Mary Wells, was the daughter of Indian scout William Wells, and the granddaughter of Little Turtle. Click here to read more about the genealogical background of James Wolcott. Mr. Wolcott died in 1873. Click here to see his listing at FindaGrave. 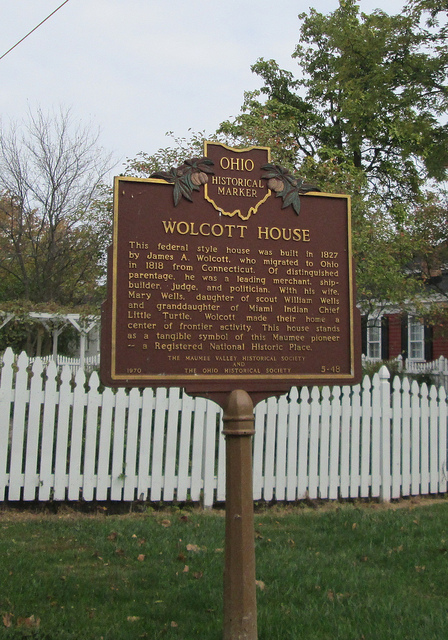 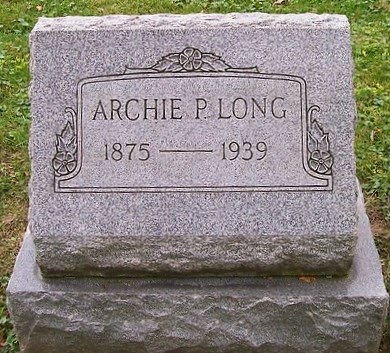 Archie P. Long was born on September 5, 1875 in New Haven, Indiana, to August and Edith (Compton) Long. For twenty-eight years, Archie Long was a firefighter with the Sandusky Fire Department. He joined the fire department on January 18, 1910, and he was promoted to Lieutenant on May 11, 1917. On November 6, 1939, Archie Long died at the age of 64, from heart disease. Funeral services for Archie Long were held at the home of his mother, Mrs. Edith Long, and he was buried at Sandusky's Oakland Cemetery. Pallbearers were members of the Sandusky Fire Department and members of the Santa Clara Camp, Spanish American War Veterans. Honorary pallbearers were Former Fire Chief John Curtis, former Assistant Fire Chief Dan Diskin, former Captain Tom Nolan, former fireman Joseph Schneider, Fire Chief W. McLaughlin and Assistant Fire Chief Clarence Owen. Archie Long was a veteran of the Spanish American War. He was survived by his mother and two sisters. An obituary for Archie P. Long is found in the 1939 OBITUARY NOTEBOOK at the Sandusky Library.
Posted by Dorene from Ohio at 1:30 AM 0 comments 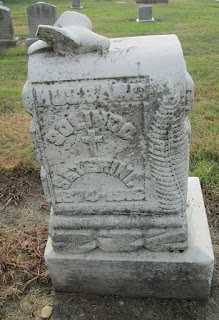 Solindo Severini was born in Pesaro, Italy in 1874 to Tony and Augusta Severini.  He emigrated to the U.S. in 1913.  On October 30, 1918, Solindo Severini died from bronchial pneumonia. He was buried at St. Joseph's Cemetery in Sandusky, Ohio. A dove is found at the top of the tombstone of Mr. Severine. Above his name is the word Husband. A fern adorns the right side of the stone.
Posted by Dorene from Ohio at 12:08 PM 0 comments