On January 1, 1931,my great grandparents Ada and Leroy Parker had all their children, grandchildren, and family friends the Lindsleys over. They had duck for dinner, which son Glenn Parker had picked out earlier in the week, along with his parents. 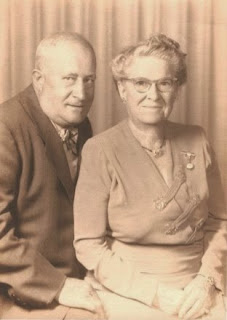 On January 2, Grandma Ada worked at the church, and her son Steen Parker had to be hospitalized due to problems with his eye. (My great grandparents are pictured to the left, in the early 1950's.)


On January 3, Grandma Ada went to town in the afternoon, and in the evening Thomas and Emma Larkins and the Louie and Adeline Moosbrugger came out to the family farm for a visit. From the listing in Grandma Ada's diary, it sounds like the two couples stayed overnight, and left the next day. Son Steen was feeling a little better. Mr and Mrs. Steen Parker (couple in back) and Louie and Adeline (couple in front) are pictured in the picture below. 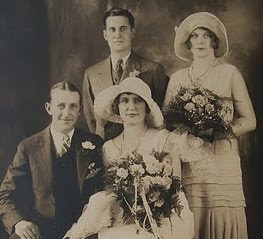 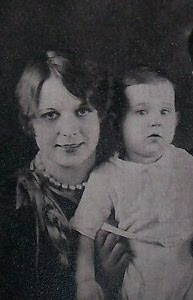 Grandma Ada left two scrapbooks to my mother, and they were then passed down to me. I am so thankful that I can get an idea of what daily life was like for my Great Grandma and Grandpa Parker by reading her diary and scrapbooks. My great grandparents worked hard, but they also had a lot of fun with family and friends by hosting frequent dinner and card parties at their big farmhouse in Perkins Township. Though my great grandparents are gone, they will never be forgotten! 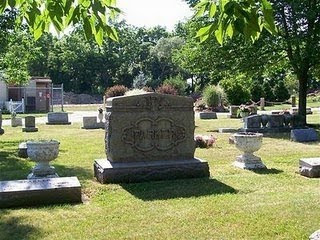 Posted by Dorene from Ohio at 4:05 AM

Email ThisBlogThis!Share to TwitterShare to FacebookShare to Pinterest
Labels: Parker

Wonderful diary! How neat to read what they were doing.

Thanks so much Harriet! I have not read the diary cover to cover yet....I just have read it in "bits and pieces."