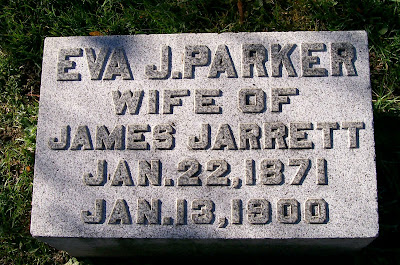 Eva Jane Parker was the oldest child of James Daniel Parker and Sarah Gurley Parker. Mr. Parker owned a general store in Perkins Township, and served for a time as the Postmaster at Bogart. He was also associated with the Sandusky, Milan and Norwalk Electric Railway. Mrs. Sarah Parker was a descendant of the pioneer Methodist preacher Rev. William Gurley.

Eva Jane Parker was born on January 22, 1871. According to Erie County Probate Court records, Eva J. Parker married James Jarrett on May 17, 1897. A baby girl was born to Eva and James Jarrett on December 26, 1899, but the baby died shortly after she was born. Mrs. Eva Parker Jarrett passed away on January 13, 1900. Rev. James Gray conducted funeral services, which were largely attended. Eva Parker Jarrett was buried in Oakland Cemetery, near other members of both the Jarrett and Parker families.

This lovely tribute to Eva, written by Julia Morgan, appeared in the Sandusky Register a few days after Eva Parker Jarrett died. She must have been so terribly missed by her family and friends.

Posted by Dorene from Ohio at 4:28 AM

Do you know Eva's cause of death? Did she die of a broken heart for losing her baby or were there medical conditions? The language of the poem sounds strange to us now with words that we don't commonly use but I loved reading it.

I am not sure of Eva's exact cause of death, but it was not unusual back then for young women to die not long after giving birth. So sad....