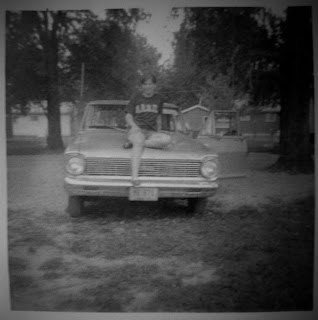 The prompt for Week Three of 52 Weeks of Personal Genealogy and History, from Amy Coffin at We Tree, and hosted by Geneabloggers, is Cars.

The only image I have of my first car is not clear at all, but my memories of it are very clear! It was an early 1960's Chevy II, the predecessor to the Chevrolet Nova. The color of the car was aqua. I was a senior in high school when I got my driver's license. Driving was never my strong suit, and unfortunately that is still the case! I took my youngest brother Matt and sister Kellie to the beach, the park, bowling...we were always looking for an inexpensive afternoon of fun on my days off from the dairy queen, and they were delighted that big sister had "wheels."

During my first year as a new driver, I got into a minor fender bender, which left a rather big hole in my front fender. My parents had six kids, and fixing up that car was not a top priority. To make my car look not so battered, I applied flower stickers all around the area where the car had been damaged. The Chevy II promptly became known as the "flower power" car. Often I was short on funds, so I would drive up to Goins Sohio in Bay View, and get 28 cents of gas. I always figured out the mileage, so that I knew with that amount of gas, in 1969 or 1970, I could get to and from the beach safely. My siblings are all grown up now, but we laugh at many a family gathering, remembering that Chevy II and the miles of fun it provided. 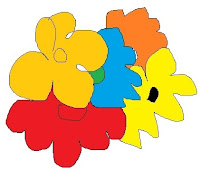 Posted by Dorene from Ohio at 4:50 PM

Email ThisBlogThis!Share to TwitterShare to FacebookShare to Pinterest
Labels: Cars