Update on Charlotte at Oakland Cemetery

After fellow blogger Katie encouraged me to get a different view of the stone of Charlotte who is buried at Oakland Cemetery, I was able to solve a mystery! Charlotte's last name is Engels. When I first took the photo of Charlotte's tombstone, it was cold and snowy, and I didn't linger long at the cemetery. On a warm summer's night, I re-visited her tombstone, and discovered that the two stones closest to hers were for members of the Engels family. So, after looking more closely, I could see the shapes of the letters for the surname Engels, below her name, which Katie helped me to translate as Charlotte Wilhelmina. So....Charlotte Wilhelmine Engels is the married name of the tombstone which honors the person formerly known only as Charlotte! Thanks for your encouragement, Katie!

By looking for the surname Engels in Sandusky Einst Und Jetzt we read that Jacob Engels was first married to Wilhemlmine Reef, though she was called "Charlotte Wilhelmine" on her tombstone, and that he married secondly, Alwina Lange.

Below are the tombstones of Charlotte and Alwina Engels. 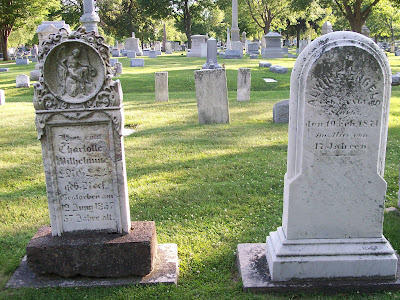 Jacob Engels' tombstone is just north of the tombstones of Charlotte and Alwina. Jacob Engels died on November 6, 1875. According to records at Family Search Labs, he married Alvina/Alwina Lange on December 15, 1859. Alwina Engels died on February 2, 1874. According to THE HISTORY OF ERIE COUNTY, edited by Lewis Cass Aldrich, Jacob Engels was a key individual in the importing of wine and growing of grapes in the Sandusky area. His early work led to the formation of the Engels and Krudwig Winery. 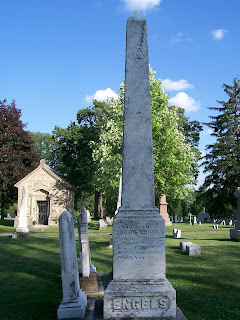 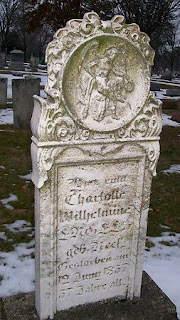 This tombstone at Oakland Cemetery honors the memory of a person named Charlotte who passed away on June 12 of 1837 or 1857. She was either 37 or 57 years of age at the time of her death. After searching through U.S. Census listings, cemetery records, Ancestry Library Edition, and the Ohio Obituary Index, I was unable to decipher her last name, which may be Millspaugh or Millhouse. A seated angel adorns Charlotte's tombstone. The German words on Charlotte's indicate that she is most likely of German origin. Charlotte remains a mystery to me!
Posted by Dorene from Ohio at 4:01 PM

I know German if you need help on these German ones!

If you have a bigger or straight on picture I can help. Her maiden name is on it but I can't read it...where it says geb. _______. Geb. is short for geboren or "born". I also have a full membership to Ancestry to try and find more about her if you'd like. I'm always up for a good mystery!

Thanks so much Katie!

You know what? I think it says Charlotte Wilhelmine now that I look at it again...haha, now I'm all curious too. Let me know if you can share a larger pic and I can help!

I will have to try to get a better
shot of the stone!

Thanks for your research on Charlotte Wilhelmine Engels. I am using the grave as part of a print focusing on 19th Century gravestones at Oakland Cemetery. Confirmation of this name was the last bit of information I needed.